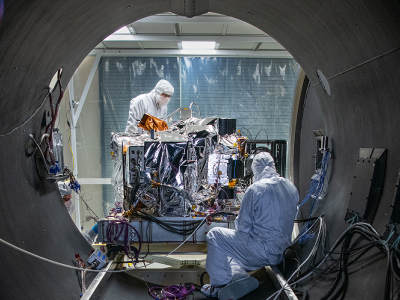 One of the ways is the development of new missions such as Plankton, Aerosol, Cloud, ocean Ecosystem (PACE). PACE will use next generation "ocean color" technology to learn more about phytoplankton that live in the upper ocean. In addition to being the base of the marine food web, phytoplankton play a similar role to land plants by absorbing carbon dioxide and producing oxygen.

NASA also helps with shark conservation from space, ships and autonomous underwater vehicles. NASA's EXport Processes in the Ocean from Remote Sensing (EXPORTS) campaign is studying the ocean's biological pump - the process by which carbon from the atmosphere and surface ocean is sequestered in the deep ocean. This process starts at the surface, where phytoplankton draw carbon out of the atmosphere through photosynthesis. This kicks off the marine food web because phytoplankton turn atmospheric carbon into food when they are eaten by tiny animals called zooplankton. Those in turn are eaten by fish who are eaten by other fish and large marine animals, including sharks. When fish and marine animals die, they can carry the carbon stored in their bodies to the ocean floor.